California is in the midst of a serious four-year drought, which has been an attention-grabber here and around the country. People have seized on the drought as a symptom of global climate change, and as a cypher for water shortages as a way of life and even for the fragility of civilization as we know it on the West Coast. Don’t believe it. 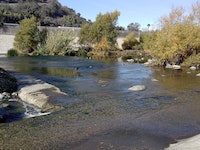 The New Deal Lives On in the City

The New Deal of the 1930s utterly transformed New York City, but most people hardly notice today. The landscape of public works created under the aegis of the Roosevelt Administration has become part of the backdrop of everyday life. But try to imagine the city without the Triborough Bridge, Lincoln Tunnel, and Henry Hudson Parkway and you get an idea of how much the city still owes to the New Deal.

Nicholas Gamso has taken me to task for a paean I wrote to the way the New Deal transformed New York City for the better in the midst of the Great Depression. He questions the public-spiritedness of much of what was done to New York in the 1930s under Robert Moses and Fiorello La Guardia, the lack of democratic input and racial inclusion, and the way the modernization of New York was also its undoing.