Wendy Cole arrived on the fifth floor of 32 West 18th Street wearing a grimace and holding the hand of her three-year-old, a boy with closely cut bronze curls who plodded next to his mother with heavy feet. Cole didn’t even glance around the waiting room as she stepped off of the elevator—instead, she went directly to the receptionist’s desk to retrieve her paperwork. She was running late, and had spent nearly twenty minutes walking up and down West 18th Street trying to find the midwifery center of St. Vincent’s Hospital.

Will the City Get the Lead Out?

It was Friday, September 19, and in City Council chambers this meant a third day of hearings since July on new lead paint legislation. On Grove Street, in Bushwick, it meant Vevidiana Padilla was watching television with her son, Brian. The 15-month-old—with wide cocoa eyes and a toddler’s plucky gait—recently had his blood lead level measured: it is high enough for Padilla to worry (seven), but not yet high enough for Brian to be considered lead poisoned (ten) or to trigger environmental intervention by the city (twenty). 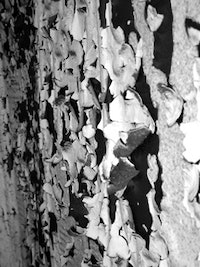 The Truth in Greensboro… Starts in Brooklyn

Sally Bermanzohn remembers everything that happened the morning of November 3, 1979 in snapshots, every image clear and precise. She and about fifty other demonstrators from the Communist Workers Party gathered at 11 a.m. near a housing project in the heart of Greensboro, North Carolina’s black community for a scheduled anti-Ku Klux Klan rally.

Harold and Joan met in August 1958 and went out every night for a week. Harold’s parents were away, “and not knowing anything about cooking, and never having been left alone at home, I was absolutely ready for the right girl to come along,” he says.

“We’re Italian, so it was always ‘eat.’ If anything was wrong—oh here, eat this. If I was happy—eat this. And that was it. That’s how Italians show love and affection. By making you eat.”

Before crack, before Meghan’s Law and before 2.1 million people crowded U.S. prisons and jails, the reality of prisoner re-entry still held true: most prisoners come back. Back to the blocks they grew up on, to the kids they left behind, to no job, few prospects, and a weekly appointment with their parole officer.

For the spirited girl, what’s for dinner is usually soy nuggets. She makes her own eggs for breakfast and tries to avoid eating anything green. Her favorite food is macaroni-and-cheese, which is mostly yellow. She prefers rice and peas to rice and beans. And after dinner she’ll bargain with her mother, Rachel, for more Swedish fish.

I Want to Re-Home Your Pet

On October 28, I found a puppy, left or lost, tied up near the Prospect Expressway in South Park Slope. The no-kill shelters were full; my friends were either unreliable or too broke to care for the pup; and the dog didn’t have tags or an identity microchip embedded in its coat (we had it scanned). So I called my roommate, took a Claritin and posted “found” notices on semi-reliable web sites describing the hapless pooch and lamenting my allergies.

As part of an ongoing series, The Rail will be visiting dinner tables throughout the borough to examine how economics, culture and taste influence what for most remains the principal meal of the day.

As part of an ongoing series, The Rail will be visiting dinner tables throughout the borough to examine how economics, culture and taste influence what for most remains the principal meal of the day. Whether expense or convenience, diet or tradition, access or ideology, What’s For Dinner aims to enrich our understanding of the diverse local factors that inform our decisions about the food we eat. These are the politics of the plate.

As part of an ongoing series, The Rail will be visiting dinner tables throughout the borough to examine how economics, culture and taste influence what for most remains the principal meal of the day. Whether expense or convenience, diet or tradition, access or ideology, What’s For Dinner aims to enrich our understanding of the diverse local factors that inform our decisions about the food we eat. These are the politics of the plate.

A Minimum Matter of Survival.

Stepping through the bright yellow door and into the cafeteria of Neighbors Together, the first thing you notice are the white Fruit of the Loom T-shirts pinned to one wall above a chalkboard. Messages are scrolled in thick, uneven black marker across the front of the shirts: “Governor Pataki: Help Us in Our Struggle,” “Election Day Is Coming,” and so on.

“We started with an appetizer of some vegetable pâté on spelt crackers,” says Rachel. She and her fiancé, Dan, share most meals, so on Friday evenings after picking up the Hebrew newspapers and having his beard trimmed by a barber in Crown Heights, Dan buys a kosher chicken for the couple’s dinner. It’s one of the few items they purchase in the neighborhood.

In addition to overcrowded classrooms, an underfunded district, and a staffing crisis that looms on the horizon for New York City’s public schools, teachers may soon be worrying about their very own health.

If the dogs stop barking long enough from inside their kennels at DUMBO Pets—an all-purpose pet owner’s delight housed on the short cobblestone stretch of Washington Street in the growing Brooklyn neighborhood— the sound of a passing Q train can be heard rattling overhead along the underbelly of the Manhattan Bridge. 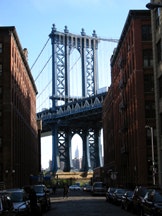 A mid-February stroll past the acre-and-a-half Wyckoff Farm in East Flatbush does little to evoke an image of what life here looked like before 1901, when most of Brooklyn was a working plot of fertile farmland. A dozen or so fledgling apple trees have been planted in rows near the corner of the lot that advertises the “Fixed Flat Tire” services of the neighboring junkyard. 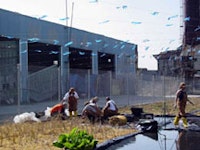 Sleep With Your Mouth Closed

One victim blames a sleepless night in a hostel in L.A. But whether on the guests from Vermont or the used mattress picked up off the curb in Long Island City, bed bugs have arrived in Brooklyn—and bed bugs suck.

In Crossville, Tennessee, population about 9,000, you’re as likely to see a billboard that asks “If You Died Today, Where Would You Spend Eternity? 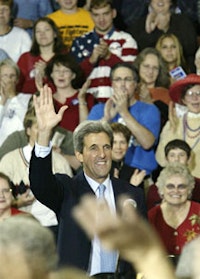