Cradled in The Slipper Room’s womb of a bar that glowed Amsterdam red, Miss Saturn, a go-go dancing hors d’oeuvre for the burlesque buffet, was puppeteer and marionette in her own body. 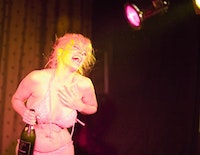 DTW’S The Nothing Festival: Not Much

The Nothing Festival at Dance Theater Workshop this April was intended to be an “artistic oasis stripped from…marketing, fundraising, and production challenges,” where choreographers presented works created from nothing. The result of the first of the two-week festival, however, was reminiscent of a student choreographic workshop.

Emanuel Gat Dance, founded at the Suzanne Dellal Center in Tel-Aviv in January 2004, premiered Winter Voyage, a haunting duet performed by Israel-born Emanuel Gat and Roy Assaf, in conjunction with the two-year-old ensemble piece, The Rite of Spring at this summer’s Lincoln Center Festival.

In his 2006 season at DTW, Jeremy Nelson stripped dance to the bare essentials: flesh and bone moving through space. ...

Michael Helland’s The Dress Up Show

While waiting in The Chocolate Factory’s brick entrance area-art gallery for Michael Helland’s The Dress Up Show—starring Helland, Miriam Wolf, Stephanie Booth, Carly Pansulla, Anna Carapetyan and Daniel Linehan—to commence, I felt like a not-quite-cool-enough spectator hoping to get into an underground hipster club.

Rarely do I see a performance that is clean and well crafted, without being pretentious and contrived. Lionel Popkin’s premiere of Miniature Fantasies, an evening-length trio inspired and shaped by Indian Miniature Painting and presented by Danspace Project at St. Mark’s Church in November, was just that, an accomplished rarity. 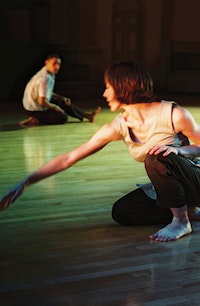 Ann Liv Young’s “Michael” is an interdisciplinary exploration of the hyper-real, which defies categorization as anything other than “performance art.” By juxtaposing the natural and theatrical, the private and public, the mundane and the over-the-top, Young complicates the relationship between audience and performer, obscuring the boundaries between the two, thereby questioning the limits between “life” and “art.” Executed in a fast-paced, feverish state of excitement, “Michael” is a veritable forty-five minute abduction that leaves the audience breathless, dazed, disoriented, at least a little bit uncomfortable, and, to be honest, in desperate need of a shower.