On Movies, Dynasties, and Hope

One of the most interesting political movies of recent years was the German film The Lives of Others, which gave a realistic depiction of the overwhelming espionage to which the government of East Germany subjected the citizens of that country, and of the corruption at the highest level, as officers of the state and the ruling party used their powers for unspeakable private purposes. 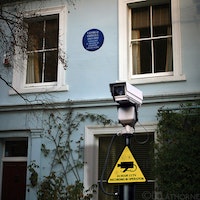 Restyles of the Dead and Famous. Courtesy of the artist: ullathorne.photoshelter.com." />