I wanted to begin this inaugural sports column with something about Brazilian soccer. Such would be a global approach—a corrective to the myopia of mainstream U.S. sports coverage. “Football?” “Do you mean, ‘soccer?’” So that’s where I wanted to start.

The Olympics Parade of Nation-y Peoples

The father of Nodar Kumaritashvili, the young Georgian luger who died the day before the start of the Olympics, was himself a Soviet Union luger. His father was likely, during those broadcasts, called “Russian.”

Will I Have Anything to Re-say About Sports?: The NBA/NHL/MLS/World Cup and Cable TV

Hold onto your protective gear because this column races quickly through notes on the NBA finals, the NHL Stanley Cup, the Red Bull Arena debut, and a bit of World Cup coverage.

The archaeologist leaves a copy of her autobiography on the corner of the desk knowing that at night the inspector cannot resist reading the manuscript entitled My Seneca Village.

I never thought my friends would go fight in the Gulf War. It seemed simple: we would move to Canada if necessary. The TV screen was mostly dark, there were reporters in red Patagonia jackets under the channel’s graphic, there were streaming lights across the sky and an occasional glow from the ground. “We are live from Baghdad” but our TV screen looked like a video game for which we had no controls.

An excerpt from SPEECH

She went out for bread and on her way she walked past the open doors of the auditorium used for bridal gown, gun, and political conventions. She took some steps back and looked inside at floors being mopped in half circles. The mops like long hair sweeping back and forth leaving trails of water fading quickly under the lights.

Needing more time to arrive, I sit on a bench between ferry terminal and city gate, imagining that my father’s history is visible on my face. 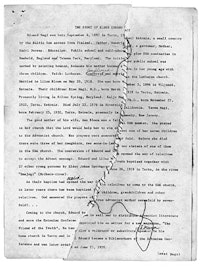 “Come over, I’ll make you some spaghetti.” I had no money when I got back from Mexico.