by Ferdinand Cazalis, with the assistance of Emilien Bernard, and a crowd of nights who will recognize themselves

Several nights superimpose themselves over the Parisian Nuit Debout [Night Standing, or Up All Night], which began on March 32, [sic]1 so that the night would never end, a sum of singularities and meetings difficult to summarize or to fix. 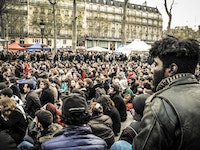 FIGHTING FOR THE FOREST
Ecological Activism in France

By Clémence Durand and Ferdinand Cazalis

Not far from Toulouse and Albi in the Tarn (south central France), the ingredients were assembled for a new ecological and political scandal: local government and agricultural industry came together, with the support of the Socialist government, to construct a dam in the midst of a forest; opposition to this project was met by high levels of violence by police and private militias. On the night of October 26 – 27, when approximately 7,000 people gathered to protest the planned resumption of work on the dam on the following Monday, the police killed one of the protesters, Rémi Fraisse—the first killing of a political activist under the current Socialist government—apparently with a stun grenade.