Formed in London in 1976, Wire occupies a unique position in the alternative rock pantheon. Never a household name, the band is still best known for a trio of albums from its earliest days, Pink Flag, Chairs Missing, and 154.

The Ex at Monty Hall

Just across the Hudson River in Jersey City, directly opposite the World Trade Center in what might best be described as a parallel universe, sits Monty Hall, the live music venue run by free-form radio station WFMU. 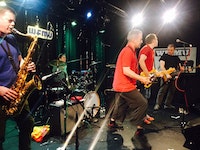 In March, the American experimental composer Alvin Curran visited New York for a performance at the new Whitney Museum, at the invitation of the Australian improvisational trio the Necks, who headlined a two-night engagement.

All In Until it Stops: JOE CASEY with Dan Joseph

As our national discourse continues to sink ever lower, a new generation of dissident musical artists is emerging to give voice to a growing mood of discontent. One of the more compelling of these dissenting soundtracks comes from Detroit’s Protomartyr, a four-piece post-punk combo with a complex, industrial-strength, guitar-centric sound.

The Sound of Ambivalence: Exploded View at Rough Trade NYC

xploded View is a self described international project fronted by the artist known as Anika (Annika Henderson), a strikingly alluring British-born singer currently living in Berlin. 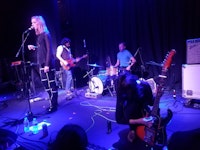 Amidst the ongoing renaissance of contemporary opera in New York, the influence of the late Robert Ashley casts an ever-widening shadow. With vibrant companies such as Object Collection and Experiments In Opera, and annual festivals such as Prototype consistently injecting new ideas into the form, Ashley's idiosyncratic vision of opera remains a touchstone of the genre.

Jon Savage: This Searing Light, The Sun And Everything Else

In the course of its four-year existence, Manchester, UK band Joy Division pioneered a new sound in rock that would come to be identified as post-punk.

By most measures, Bush Tetras are not an emerging outfit. Formed in 1979 in Lower Manhattan, the original iteration of the band lasted only three years. During that time, they helped pioneer a hugely influential style of dance-oriented post-punk, sometimes described as “mutant disco,” that simultaneously emerged on both sides of the Atlantic. 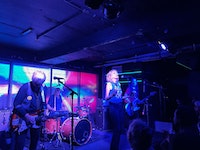 At its core, Automatic Writing is a kind of ritual magic rendered on magnetic tape. Imbued with a sense of occult-like mysticism, it transforms sound and language into a surrealist psychological space. Developed in the studio over a five year period, Ashley wrote that Automatic Writing “became a kind of opera in my imagination” that conjures a set of four shadowy characters. It is this hallucinatory auditory space, this imaginary opera, that Object Collection sought to animate on the stage.

In early October, the Chicago-based multi-genre instrumental group Joshua Abrams & Natural Information Society appeared on back-to-back nights at Union Pool in Williamsburg. Formed in 2010 and led by bassist and composer Abrams, a longtime veteran of Chicago’s creative and experimental scene, the group is continually shapeshifting, with ever changing lineups. The second night of the two, the group took the form of a quartet that included Abrams on guimbri (a Moroccan bass lute), Lisa Alvarado on processed harmonium, Jason Stein on bass clarinet, and Jim White of the Australian instrumental band Dirty Three on drums. 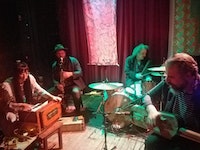 “I was breaking up with my girlfriend and needed a place to live. I walked out the door, turned left on 6th Street, and there was a door open with some guy clearing out a storefront space. 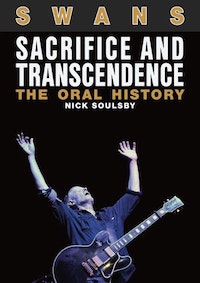 The Return of the Legendary Pink Dots

Few bands have as legitimate a claim to the label uncategorizable as the Legendary Pink Dots. Formed in London in 1980 and currently based between there and Amsterdam, the group has remained continuously active for thirty-six years, producing a discography that is dizzying in both quantity and quality.

On a windy and cold January night in Greenpoint, the Toronto-based synth pop quartet Austra appeared at Warsaw, “where pierogies meet punk,” in support of their new album Future Politics.

As if to counter the growing spread of extreme-right ideology throughout the western world, punk rock, that forty-year old, often political genre, appears to be advancing with similar force.

The Hypnotic Harmonies of Low

On the same late-September evening that Pope Francis arrived in New York City, the Minnesota-based indie rock band Low made an appearance at Brooklyn’s Music Hall of Williamsburg in support of its newest album, Ones and Sixes, released earlier in the month on Sub Pop.