Seeing the Machine in Miranda Haymon's In the Penal Colony

Opening the third season of Next Door at New York Theater Workshop this July is In the Penal Colony, an adaption of Franz Kafka’s short story of the same name written and directed by Miranda Haymon. 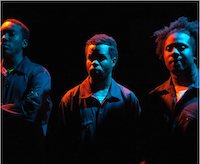