After the summer of smoke and fire

A spotlight pours yellow rays on an upright Mellotron encircled by socially distanced chairs, all wrapped in a dome of controlled darkness. An arresting silence lingers, occasionally broken as gallery guests hesitantly part the velvet curtain, enter the space, and interact with the organ. The Instrument of Troubled Dreams, 2018, is the acutely engaging centerpiece in Janet Cardiff and George Buress Miller’s After the summer of smoke and fire on view at Luhring Augustine gallery in Chelsea, which documents a selection of recent productions by the British-Columbia-based duo who have been collaborating since 1995. 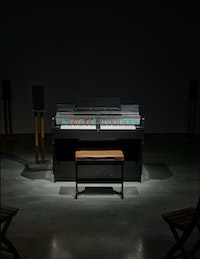