it was first of May of twenty eight/day of the manifesto of hunger of the worker/only anthrophagy unites us, my heart 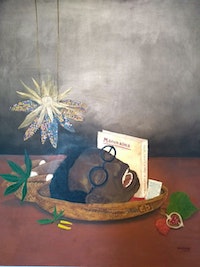