Sometimes on these long walks with my camera, the whole city seems to pour into the streets, yet when I scroll through the photos later, there is an emptiness to the scenes, as though they’ve been vacated on command.

A Protective Archipelago: A Covid-19 Correspondence

By Celina Su and Wah-Ming Chang

For four days, from the 10th to the 13th of April, we (Celina and Wah-Ming) took turns writing each other letters in the midst of our experiences while sheltering in place during the Covid-19 pandemic. We had no agenda but to connect via words rather than audio-visually.

The first hair I found was between the pages of a magazine ruelled between the mattress and the wall. It had to be hers; my own hair stops at the shoulders.

In the Beginning, Sometimes I Left Messages in the Street

Some years ago I ran into Daisy at an opening for a group show on Orchard Street. The theme of the show was “Bad Optics” and I don’t remember much about the artwork except for a wall of small square canvases, each a painting of different yet eerily identical scenes of the backsides of cops as they swarmed someone unseen on the ground.

Every little thing in Rosa’s house has energy, down to the dish towel. She never stands close to the microwave. All her pots are cast iron. Her clothes are cotton, and her food, organic. Every piece of furniture she and her husband bought has been replaced with its natural, unpolished wood equivalent.

The Road to Golgonooza

By T. Motley, Mariko Sanchez, and Dorothy and Dashiell Morse

T. Motley will continue his fake jam comic, The Road to Golgonooza, at Penumbric.com 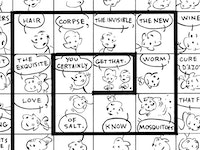 by Eugène Sue, translated from the French by Robert Bononno

“Mister Willis, a wealthy American farmer from Florida,” said Murph, “had a young slave by the name of David, who worked in the infirmary on the plantation. He found David to be of uncommon intelligence and deeply sympathetic and attentive to the sick, whom he cared for attentively when carrying out the doctors’ orders.