My father always claimed to hold the key to one of the most publicized missing persons case of the twentieth century. He knew what had happened to Jade Mandrake Klein, the ill-fated wife of the heir apparent to New York City’s wealthiest real estate dynasty—an understated clan that makes the Trumps look like bit players in the realty and development game.

By Eugène Sue, translated from French by Robert Bononno

Through the attentions of Murph and Rodolphe, who with some difficulty managed to calm his agitation, Chourineur returned fully to his senses after a long crisis. He found himself alone with Rodolphe in one of the rooms on the first floor of the butcher shop.

The Road to Golgonooza

T. Motley is the author of The Road to Golgonooza, a fake jam comic. 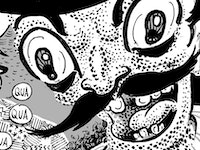