The flag of Syria’s revolutionary Kurds flies from the roof. A multiculti congregation of scruffy youth hang out in the lobby—some Italian kids with dyed hair and a punk aesthetic, some young migrants from Africa and the Middle East. 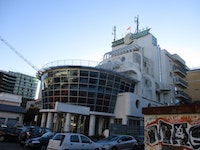 In December of 2015, beauty contestant Iroshka Lindaly Elvir shocked Miss Universe audiences as she strode on stage in a feathered skeletal headdress and sequined gown followed by a train of human-like skulls.

On August 15, 2018, a little over three months before she would form an exploratory committee for the Democratic presidential nomination, Elizabeth Warren issued a press release announcing new legislation. The Accountable Capitalism Act, a hilarious contradiction in terms, promised to “eliminate skewed market incentives” and return America to an era when corporations and workers “did well together.

Living in the age of the 1 percent and the 99 percent, mired in the swamp of crony capitalism where Citizens United makes a mockery of “one man, one vote,” presided over by a felonious billionaire who has most likely never read the Constitution and is not inclined to obey it, the very notion that capitalism and democracy might cohabit the same political universe seems like a bad joke. Capitalism in its current form has become the graveyard of democracy.