Ben Van Meter (b. 1941) began making films and light shows in the mid-1960s in San Francisco and soon became a leading figure in Bay Area-underground filmmaking. His films, especially S. F. Trips Festival, An Opening (1966) and the epic Acid Mantra or Rebirth of a Nation (1968), are compelling attempts to visually and sonically inscribe psychedelia, as experience and philosophy, in the medium of film.

An Excerpt from Slow Writing: Thom Andersen on Cinema
With an introduction by Mark Webber

Slow Writing: Thom Andersen on Cinema is the first collection of writings by a filmmaker who is known and much respected for his celebrated documentary essays including Red Hollywood (1996, made with Noël Burch), Los Angeles Plays Itself (2003), and The Thoughts That Once We Had (2015). 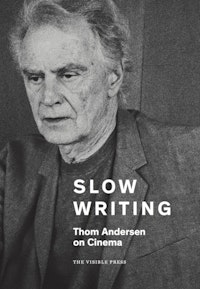 The Festival Beneath the Festival: Selections from Toronto International Film Festival 2017

“It’s been a bad year.” I suppose that this refrain heard around Toronto means—as it did in Berlin and Cannes—that the films intended to catch the official mood of a culture, its “radical center,” seem to have failed against the state of the world or the history of the art. 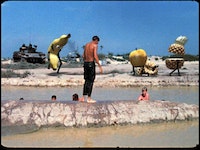 I am face to face with a young woman sitting cross-legged on a couch. She has a book in her lap; I have a notebook in mine. She is in a sunlit room; I am in a darkened theater.

You’ve seen this story a hundred times. Unstable Woman sleeps with Insouciant Man; his attempt at polite post-coital rebuff goes unheeded (you can tell it will because of the way she looks at him, all goony and unblinking, while he’s trying to let her down easy); she shows up at his job and he says ‘what are you doing here?’; her attentions become increasingly invasive, upending his professional life and