translated from the French by Mitchell Abidor

By the fall of 1960 the war in Algeria had been going on for six years. Despite defeats, massacres and torture, the FLN was gaining in strength, and opposition in France was growing. The relative timidity of the official left, in particular the French Communist Party (PCF), which insisted on mass actions calling for peace, was offset by circles of independent leftists who actively supported the FLN.

an extract from Fractals in a Box

by Luis Othoniel Rosa, translated from the Spanish by Noel Black

Wake up, Alice, says Alfred. He caresses her face gently to wake her. No, let her sleep if she wants, says Trilcinea—defender of the insubordinate, loving Cerberus of Alice Mar’s dreams.

We didn’t live together, except for the time in Provincetown, where we go for weeks at a time, starting right after Christmas when no one is around. Time slows down when the world is void of people and when you go outside all you see is the ocean, the shells and pebbles embedded in the sand shifting under your feet, the cold sky overhead and the whitecaps pummeling the shore.

Of any of the order Araneida of arachnids, none have the ability to create sounds which either frighten their enemies or express their own, genetically separate personalities, none, except these spiders inhabiting the dry wastes of the Sonoran Desert, sondifera terrastis, or sound spiders, as they are known to the many connoisseurs of vibrations.

Stranger, Father, Beloved follows a wealthy New England husband and father of two who, while hosting a party with his wife, meets a man by whom he’d like to be replaced—as a husband, and as a father.

Both Tom Daly and the modern Maraschino cherry hail from the same beautiful, small town in the heart of Oregon's Willamette Valley. Both ventured out of the valley, Mr. Daly going on to New York to study art and the cherry going on to pretty much every bar on the planet. 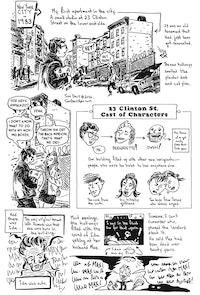 T. Motley is the 2016 silver medalist in the Society of Illustrators' Short Form Comics competition, winning for a story he contributed to Cartozia Tales. 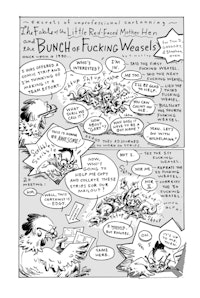