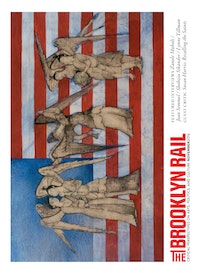 “The ability to bring together—in one space, one page, one voice, or in this case one name—two ends of the spectrum previously considered antithetical or incommensurate is crucial to our understanding of the world around us.”

Slavs and Tatars, perhaps the smartest artist collaborative around, have returned for their first New York exhibition since Beyonsense at MoMA (2012). The research-based collective of anonymous Polish, Persian, and international members began as a reading group, founded in 2006, and their activities include exhibitions, performance-lectures, and book publication. Their work references a reimagined homeland “east of the former Berlin Wall and west of the Great Wall of China.” This is a place where the spirit of the 12th-century Illuminationist and mystical master of Ishraq, Shihabuddin Suhrawardi, mingles freely with Marx and with Duldul Ot, the flying horse of Islamic lore.

Slavs and Tatars present us with an encyclopedic philosophical and artistic model where occluded narratives are “resuscitated” and given the breath of new life: this is an excavation of the past in the service of the present. In the words of the Orientalist Henry Corbin, “One cannot free oneself from the past without freeing that past itself; but to free it is to give it a future again, to make it significant.”

In Afteur Pasteur, the viewer enters the downstairs space though a PVC curtain featuring three horses, called Milk Champagne (2016). This is a reference to fermented mare’s milk, a Central Asian drink with medicinal properties, hung in bags at yurt doors as a gesture of hospitality. (Both Chekhov and Tolstoy were devotees to the remedial liquid, and Carl Jung carved a stone relief celebrating the milk giving mares mystical status.) The PVC curtain gives way to a room with army cots and a kumis machine, and a good-natured gallery attendant dolling out copper cups of a frothy yogurt beverage (mare’s milk being hard to come by in Chelsea).

The Sufi “sacred hospitality” of the mare’s milk and rugs covering the cots alter the barracks space, with overhead pink and green light adding to the aura. One cot titled Leavened (2016) depicts a Hebrew word that plays on the etymological origins of Kumis—to make yogurt you start with yogurt, a reference to bacteria. The cot’s rug has flattened breasts at each side and a woven pattern resembling fermented milk (which also references milk which has gone sour)—militarism is the opposite of healing mare’s milk. Another cot, Bomb Ayran (2016) is a word play on the Beach Boy’s co-opted Barbara Ann sung by the neocon John McCain— “Bomb, Bomb, Bomb, Bomb, Bomb Iran.” The wealth of this ancient culture is in the U.S. cross hairs; if ever artists were needed to reconcile opposites, it is now. Another cot, titled Microcosmos (2016), references Robert Fludd’s Utriusque Cosmi Historia, a 17th-century volume on astrology. On the rug’s Cosmographia a microbe replaces man at the center of the cosmos—a heretical move that would have upset Aristotle and Thanes.

On the gallery’s upper floor is an assortment of works from 2014 – 2016, the standout being a work that holistically summarizes the philosophy of Slav and Tatars. PraySway (blue) (2015) is a giant set of prayer beads that function as an actual swing. In the most physical way, the viewer lifts off, suspending disbelief, and swings between binary opposites—and previously un-reconciled pairs. The sacred swings into the profane, Orient into Occident, rigid formulas into contrary positions, and staid academic dogmas into non-invested open-mindedness. This is not simply about moving between opposites, but also about occupying both ends of the spectrum, and pushing the walls of interpretation. The group has been inspired by models like Norman O. Brown who deepened his study of the Koran by reading William Blake and James Joyce while reinforcing his own Christianity.

Slavs and Tatars have the intellectual capacity, depth of encyclopedic research, and linguistic skills generally associated with scholars. The multilingual collective is astonishing in their texts and transliteration, which may both respect a text with careful translation (as in their Molla Nasreddin books), or use playful and disrespectful rifts, where one alphabet transmogrifies into another with whimsy. The Alphabet (2016), one of a number of vacuformed plastic signs of the series “Tranny Tease,” appropriates Marcel Broodthaers’s Poèmes industriels, replacing the Latin alphabet with Arabic.

Slavs and Tatar’s work represents a new Eurasian Great Game that challenges older models about what constitutes art making, and eclipses much European critical theory suffering from fatigue. Their mascot, Molla Nasreddin, the Sufi wise man-cum-fool who rides into the future while facing backwards on his donkey, questions our notions of modernity and progress, and who decides what constitutes modernity. A world of Oriental thought, discarded wisdom, and realms of the sacred are resuscitated and find a place in the discourse. This exhibition is a microcosm of a prodigious body of work and thought that is worthy of further exploration. The astonishing work of Slavs and Tartars is a game-changer on many levels, for both the art and academic worlds.

Ann McCoy is an artist, writer, and Editor at Large for the Brooklyn Rail. She was given a Guggenheim Foundation award in 2019, for painting and sculpture. www.annmccoy.com