This novel is both a boxing novel and a novel about multicultural America in the 21st century. What distinguishes it from other boxing novels is its many women characters, which the author has drawn sympathetically. It is a novel about a world in which different races seem to operate without as much friction as in other social realms.

from Foucault, in Winter, in the Linnaeus Garden

by Michael Joyce, out now from Starcherone Books

This novel takes the form of an historical fantasy consisting of letters, all imaginary and most of them unsent, which thus “fiction” an imaginary history that is at least doubly fictional: an imagined imagined life of the philosopher Michel Foucault.

by Ibrahim al-Koni, translated from the Arabic by William Hutchins

He stole the oil from his elderly black foster mother. He waited till she went out to milk the goats by the light of the splendid firebrand. Then he crept to her corner and poured the pure, mountain liquid in the water skin.

translated from the French by Nancy Kline, to his forthcoming collection, Earth Absolute and Other Texts (Contramundum Press)

They tell me I was born in 1925 in a small town in eastern Transylvania, whose acquaintance I was able to make a few years later. My parents met there, following the war of 1914-18, though both hailed from the harsh villages of the high Carpathian plateaus; my father had come to find a job after his discharge. As the child of novice city dwellers and happy to be so, I eagerly waited for vacations when I could return “behind the back of God,” as they used to say.

Two Poems from Earth Absolute and Other Texts

by Lorand Gaspar, translated from the French by Mary Ann Caws

one day, after so many years of not waiting / like a divine promulgation a cloud / too heavy to pass breaks: it’s the flood

by Monica Sarsini, translated from the Italian by Maryann de Julio

My cousin Piero I saw him once every three, four months. He lived with his mama, Aunt Emma, my father’s sister. He did everything, he was even in France in the Foreign Legion, he had cashed some of his father’s accounts, my other cousin in contrast was an angel.

T. Motley is a core contributor to Cartozia Tales, a fantasy mapjam comic for all ages. 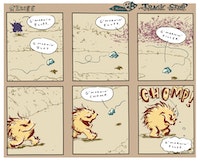