WHITHER THE REPUBLICAN PARTY?
The 2014 Election and the Future of Capital’s “A-Team”

In most ways, the 2014 Congressional elections represented “more of the same” for mainstream U.S. politics. The Republicans’ increased majority in the House of Representatives and their capture of the majority of the Senate in 2014, despite appearances, does not represent any more of a “sea change” in public opinion than their 2010 victories.

Since 2011, Brandon Jourdan and Marianne Maeckebergh have been making a series of videos available on the web under the name Global Uprisings. Their latest production, “After Gezi: Erdogan and Political Struggle in Turkey,” was made available in late October. On a recent visit to Brooklyn, Brandon Jourdan made time for an interview with Field Notes Editor Paul Mattick.

FIGHTING FOR THE FOREST
Ecological Activism in France

By Clémence Durand and Ferdinand Cazalis

Not far from Toulouse and Albi in the Tarn (south central France), the ingredients were assembled for a new ecological and political scandal: local government and agricultural industry came together, with the support of the Socialist government, to construct a dam in the midst of a forest; opposition to this project was met by high levels of violence by police and private militias. On the night of October 26 – 27, when approximately 7,000 people gathered to protest the planned resumption of work on the dam on the following Monday, the police killed one of the protesters, Rémi Fraisse—the first killing of a political activist under the current Socialist government—apparently with a stun grenade.

Are we really feeling healthier or just dying less?
Questions for José Tapia

Since the imposition of austerity policies on Portuguese society, I face a worse social situation in this small country, probably the poorest in Europe, every time I go back there. While the social consequences of austerity and the destruction of public services are probably less dramatic there than in Greece, they are nonetheless terrible. This is to introduce the few comments that follow on the recent interview of José Tapia (JT), “Health and Economic Crises” published in the Brooklyn Rail in October, 2014. 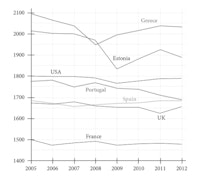