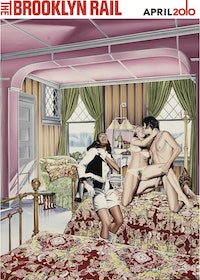 Reading a book called The History of White People on the subway is a disorienting experience. Each time I look up, I encounter a spectrum of skin colors, from pasty winter white to deep African black—with numerous shades in between. Nell Irvin Painter’s insightful new book may remind us that in reality, there is no such thing as racial difference. But as I glance around the N train, it’s hard to avoid seeing distinctions in hue without thinking that they reveal something innate about each person; such a habit of mind is ingrained in American culture (and we are by no means exceptional). It’s even more troubling that in 2010, Brooklyn remains so residentially segregated that one can likely guess pretty accurately where each person lives. As to the question of whether Obamaland can become a post-racial society, color me a skeptic.

Painter’s approach brings forth the strengths and weaknesses of old-fashioned intellectual history. In assessing how leading thinkers from antiquity through the present created dubious racial hierarchies, Painter creates a coherent narrative based around innumerable incoherent ideas. There’s more than a bit of dark humor to be found in the writings of figures such as the German philosopher Johann Gottfried von Herder (1744-1803), who once insisted that Turks (by which he was referring to Persians) were “originally a hideous race, [but they] improved their appearance, and rendered themselves more agreeable, when handsomer nations became servants to them.” Painter seems to take particular delight in detailing the many idiotic racial observations of Ralph Waldo Emerson, still a towering giant in American thought. Like Jefferson before him, Emerson worshipped the Saxon “race,” at one point maintaining that as opposed to the innate “despotism” of the Normans, the “Saxon seed carries an instinct for liberty.” As history all-too frequently reminds us, yesterday’s windbag will be tomorrow’s laughingstock.

How much the leading thinkers of any era represent popularly held views is another story. Long before mass education and mass culture, those considered “white” in America held very clear ideas about their alleged superiority. And the books from which those ideas sprang were full of statutes, not intellectual inquiry. I could go on at length about how in the aftermath of Bacon’s Rebellion of 1676, Virginia elites created legal separation of blacks and whites—see the classic works of Winthrop D. Jordan (White Over Black) and Edmund S. Morgan (American Slavery, American Freedom). But I’ve reached my stop, and I’m sure to get back on the subway another day.

A Time of One’s Own: The Struggle Against One-sided Narratives of History

The relationship to time escapes me regularly, and vice versa, due to a chronic desynchronization—an incompatibility of cruising speeds, even—that I experience in my ordinary quotidian life and in my artistic practice. Moreover, the gap between the measurement and the evaluation of time varies significantly according to cultures, eras, and perspectives, and is also reflected in elements of language and in current prejudices that consist, in particular, of praising the strong allure of the great powers as opposed to celebrating slowness.

Despite its Bumpy History, Merrily We Roll Along Glides Back to New York

The first time I saw Merrily was at Fair Lawn High School in New Jersey in 2008; Stephen Sondheim apparently attended a performance and spoke to the cast. I remember being amazed by the score, confused by the story, but moved by the ending—in that amateur production’s final gesture, as the chorus refrains “me and you” during “Our Time,” antihero Franklin Shepard’s piano comes back on stage and he, alone, faces it. Maria Friedman’s production, now sold out at New York Theatre Workshop, concludes with a similar visual, and an idea clicked: music is the you to Franklin’s me, the thing he cares most about and what he has to lose when the people who make him sing fade away, dimming like distant stars.

The book uses unstapled pages from Time magazine as the bases of its collages. It shows what it feels like to live in a crumbling empire, in an era widely regarded as “the end of history.”

Time is a socio-technological system with profound organizing qualities that feels, these days, exceedingly oppressive. There’s never enough time! For anything. Calendars are the earliest containing device with the purpose of determining a social order; the history of the Roman calendar reveals the role of international and national politics that play out across each new temporal infrastructure. Our temporal orders have been designed through the global proclamation of Greenwich Mean Time in 1884 by colonial empires, the apocalyptic anxiety provocations of the doomsday clock established in 1947, the insistent instant-ness of digital time since the 1970s exacerbated by strings of video chat meetings of the last couple years, and the frenetic branding of our social/professional lives demanded by transnational corporate technology’s mediation of everyone and everything, all the time. It’s a mess.