As an organizing principle, the title of the 55th Carnegie International, Life on Mars, (followed a bit too breathlessly by the taglines “Are we alone in the universe? Do aliens exist? Or are we, ourselves, the strangers in our worlds?") comes off as a consummate nonstarter.

Letter From Venice Off-Season: Art between the Biennials

Despite the growing number of biennials on various continents throughout the world, (excluding Greenland), Venice appears to be the one that attracts the greatest attention on an international scale, and not merely because it was the first of the breed. Its occasional pitfalls, conflicts, and deficits notwithstanding, most serious art observers still regard Venice as the most pleasurable, even the most prestigious. 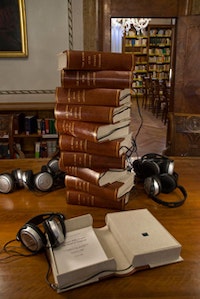 Although he once denounced film as an inferior form of expression, few artists have experimented more with the medium than Salvador Dalí. Throughout his career, the artist collaborated with the likes of Luis Buñuel, the Marx Brothers, Alfred Hitchcock and Walt Disney to create fantastic visions that played out on the big screen—and which are now the subject of “Dalí: Painting and Film.” 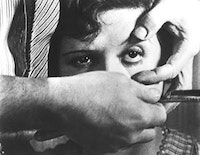 Kirchner and the Berlin Street

When Ernst Ludwig Kirchner (1880–1938) moved to Berlin in 1911, he was already in his early thirties. He had long completed his architecture studies at the Technische Hochschule in Dresden and recently gained prominence as one of the co-founders of Die Brücke, which, along with Der Blaue Reiter, became one of the two most important German Expressionist artists collectives. 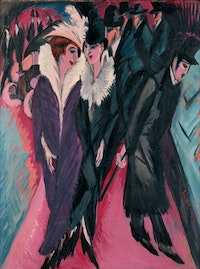 The Bowery Poetry Club was transformed into the chapter house of an abandoned flying saucer on July 20th with a performance by Michael Peters and Erik Carlson, the magi-like annunciators of Peters’ Vaast Bin. The venue’s stage was covered in spaghetti-like ringlets of wires and Christmas lights, with Carlson crouched in front of an inlet of sound pedals and audio devices.

Jess (1923-2004) was twenty-five when he decided to become an artist, and felt, as he would later say, that he had come to art too late to learn how to draw. As he put it: “I didn’t start out as a child or young man to develop skills with the hand and eye."

The first place the eye lingers in Chris Domenick’s pair of drawings, "Tiger Roses" and "Postcard from Isthmus", is the floating, sideways bouquet of roses. This horizontal pile-up of expertly rendered floral membranes becomes an anchor, a familiar form that restores confidence in our perceptive powers. 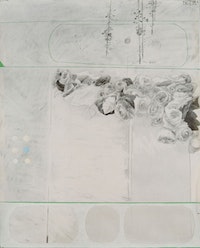 J.M.W. Turner (1775-1851) has been recognized both as a leading representative of the sublime in landscape painting and a harbinger of the Modernist temperament that would endeavor to do away with exactly such literary influences in art. Of the sublime Turner was well informed, while of the Modern mind he could only have guessed. 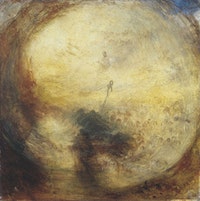 Antonio López García is the titular head of the Madrid Realists, a group of painters and sculptors little known outside of Spain. They are bound together by their commitment to working from direct observation, which many consider passé, if not altogether old fashioned and obsolete. 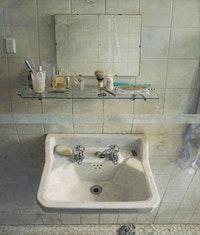 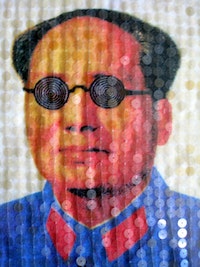 Ten years ago the late, great Pat Hearn teamed up with Matthew Marks for the brazenly titled Painting Now and Forever, Part I. Billed as a “highly subjective, celebratory survey of contemporary painting” it featured over 40 artists, old, young, alive and dead. 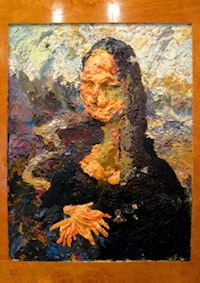 Spending the summer in Quito, Ecuador, I found scarce evidence of contemporary art. The few galleries I visited were still basking in the light of mid-century painters like Oswaldo Guayasamín and Eduardo Kingman.

Unconfirmed reports of a giant starfish washing up on Scolt Head Island, a sandy spit of land off the Norfolk Coast in England, sent Anita Bruce, a textile artist and amateur zoologist, out combing the shoreline.

The recent Beijing Olympics has highlighted a crisis in contemporary Western architecture and some of us are worried. Earlier this year, Thomas Micchelli penned an insightful essay in the Rail entitled “Monumental Squalor,” which indicted architect Robert A.M. Stern for his complicity in the George W. Bush Presidential Library, a project that is planned to perpetuate the bankrupt beliefs of a presidency that has destroyed the ideals of America.

Art world insiders have a peculiar relationship with the notion of mainstream popularity. On one hand they hope that art as a cultural force can have a significant impact on the consciousness of a larger public; and on the other they disparage anything that seems like pandering to a general audience. So what’s an ambitious artist to do?

Every three years, curators at the Yerba Buena Center for the Arts comb through the region’s galleries, artist spaces, and studios to put together a survey of emerging artists called Bay Area Now. 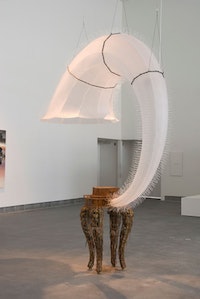 Nearly two thousand years ago, in 79 ad, the Roman city of Pompeii was destroyed and buried by two days of lava swells and volcanic ash from Mt. Vesuvius. Among the ruins, the city’s excavation in 1860 unearthed cavities formed by the bodies of residents trapped within the lava, their burned voids fossilized by the hardened ash. 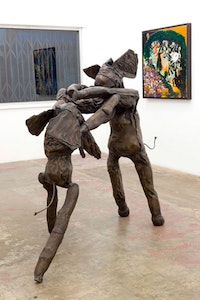 In 1894, August Strindberg, the late-nineteenth-century playwright, produced a series of enigmatic images he deemed ‘celestographs.’ He made them by leaving photographic plates out at night and then developing the results, which consisted of splotches and nebulous dot clusters on a black ground.

In a recent review of “How Soon Is Now?”—the 28th annual exhibition for the Bronx Museum’s Artist in the Marketplace (AIM) program for emerging artists —Roberta Smith laments the failure of the current crop of artists to embrace skill-building courses like painting and drawing, replacing the direct, tactile connection to materials with theory and artspeak. 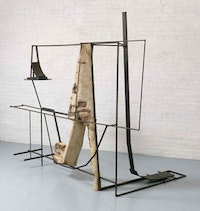 When the Museum of Modern Art staged its debut architecture exhibition in 1932, curators Philip Johnson and Henry Russell Hitchcock were tasked with a tricky little caper: to present modern architecture in such wise as to make it appear not only emphatically novel, but imminently plausible. 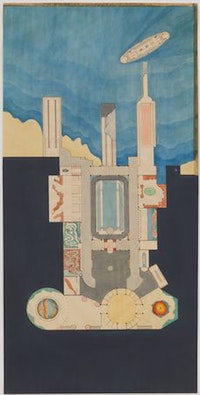 “No building is more organic than this inverse digestive tract,” Robert Smithson wrote of the Guggenheim Museum in 1966. “The ambulatories are metaphorically intestines. It is a concrete stomach.” Smithson meant this diagnosis to sound grave—probably deadly—and he may have been willing to risk hyperbole to get his point across. No doubt Frank Lloyd Wright built with an organic metaphor in mind, but this metaphor was not as specific as Smithson would have it, nor were Wright’s results so visceral. 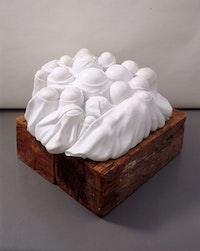 “Hi, my name is James, and I’m an Internet addict.” “Hi James!” A small circle of bleary-eyed geeks sit on folding chairs in a musty church basement. “It started a couple of years ago, when I started lurking around art blogs.” “Spawn of the Devil” mumbles an obese twenty-something wearing pajama bottoms and a Buddha patch. “I thought I had it under control, then I signed up for a Google account…” The hook was set: I was a blogger. 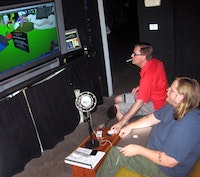 Ghada Amer: Love Has No End

Ghada Amer is best known for works that at first glance seem to be Abstract Expressionist paintings but are actually pornographic images of women embroidered onto canvases with colored thread. It is Amer’s choice to let the thread spill from these images, pouring into rhythmic tangles that create visual affinities with Abstract Expressionism’s swaths of color and gestural lines. 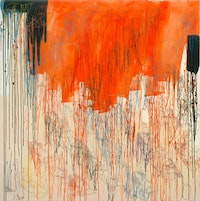 “Grandma” is a word that can mean either nothing at all apart from a kinship designation—grandmothers are women, and a woman can be a lot of different things—or a set of familiar stereotypes associated with things like antimacassars and tea cozies.

Several years ago Jerry Saltz argued against the New York art world’s status quo by calling for small groups of artists, curators and supporters to counter “supply-and-demand thinking” with a “production-and-experience thinking.” The argument being to create a culture in which many voices were heard rather than being dictated to by the singular drone of the market. 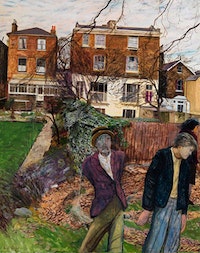 In stark contrast to Claydon’s efforts, the ceramicist Grayson Perry has worked with England’s Arts Council to curate an exhibition drawn from their collection. 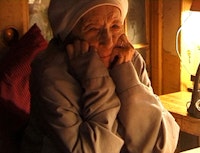