As a principal dancer with both the Kirov Ballet and American Ballet Theatre, she has danced nearly every traditional ballerina role. A show featuring Vishneva, with her cornucopia of classical experience, in a more experimental mode promised to be interesting. 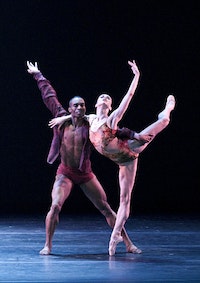 Ballet as a Reality Show

These 2,500 ballet fans were the fortunate percentage of the rumored 10,000 who had, two weeks earlier, swamped a special ticketing Web page that New York City Ballet had set up for fans to attend two open dress rehearsals of Susan Stroman’s Double Feature, a Broadway-style romp of a ballet. Another 2,500 would attend a second act rehearsal the following day.

Tbilisi-born Nina Ananiashvili, for many years a star of Moscow’s Bolshoi Theater and the American Ballet Theatre, and a guest dancer in venerable companies worldwide, was approached in May of 2004 by Georgia’s young President, Mikheil Saakashvili, who had taken office only five months before. Saakashvili requested a meeting with the dancer, who was then at work with ABT in New York, and told her he wanted the nation’s august but faltering company restored to its former glory, and that he wanted her to make it happen.