The Church of Young Jean Lee

Young Jean Lee didn’t always imagine herself a playwright. In fact, it was pretty far off her radar until five years ago when she had a bit of a quarter life crisis. Her therapist asked her what she would be if she could do anything in life.

To say that Fulya Peker is an active theatrical artist is a gross understatement, made abundantly clear as one tries to track her down as she shifts from theater to theater, working on Richard Foreman’s Wake Up Mr. Sleepy! Your Unconscious Mind is Dead!, the Wooster Group’s Hamlet, and her own New York directorial debut, Requiem Aeternam Deo, a meditation on Friedrich Nietzsche’s seminal modernist text, Thus Spoke Zarathustra (using the new Graham Parkes translation as source material).

It’s a truism that the discussion of class is a taboo in American society. In fact, however, it’s discussed quite often, whether in the language of the rightist, “blue-collar” backlash, or the various liberal pieties of NPR and The New York Times.

“Eastern Europeans have been too busy with dramatic living to worry about dramatic writing,” explains playwright Saviana Stanescu. Perhaps it is for this reason that, in the past, others stepped in. Romanian dictator Nicolae Ceausescu and his wife Elena were executed on national television on Christmas Day, 1989. 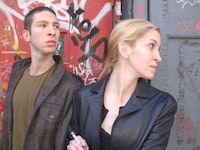