For director Jesse Berger, four hundred years go by awfully quickly. Berger sees the turn of the century bringing troubled times: a corrupt government that purports to be infallible; rulers who surround themselves with sycophantic yes-men; high level positions filled according to loyalty and personal favors, while the populace resign themselves to cynicism in the face of an increasingly violent world. 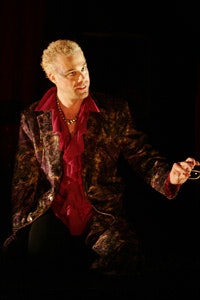 The first thing that leaps to mind when I think of Jorge Ignacio Cortiñas, the playwright responsible for Tight Embrace (along with the plays Sleepwalkers and Blind Mouth Singing, among others) is the first time I met him.

This January, the Theatre of the Two Headed Calf will present their Kabuki influenced production of George Bernard Shaw’s Major Barbara at La Mama.  Co-founded by director Brooke O’Harra and composer Brian Connelly, the company has presented a number of critically well-received performance pieces over the last five years. 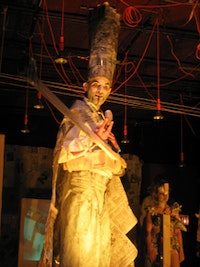 Out of the Darkness: Apparition

If one had to experience Anne Washburn’s Apparition while lying in one’s “own shit and piss,” as one character laments, one would still be eternally grateful to the playwright.