The Bessie award-winning Descent, created, directed, and ingeniously costumed by Noémie LaFrance, with a score by Brooks Williams and vocals by Shelley Hirsch, put me under its influence before the performance even began. Walking past the usually active, but now dozing, bomb and metal detectors flanking the entrance to the Criminal Court System in the City Court Building’s Clock Tower, I was whisked up twelve stories to a florescent-lit, linoleum-floored hallway. There, LaFrance, the petite, beret-clad impresario rounded up approximately thirty people to lead us, like Alice in Wonderland, through her looking glass, 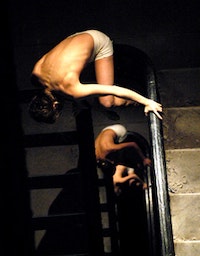 De Keersmaeker’s Dancing in the Rain

Anne Teresa De Keersmaeker’s 70-minute long Rain, which had its New York premier at BAM in mid-November, is nothing short of a tour de force. Loosely based on a novel by Kirsty Gunn in which a young boy drowns, the Belgian choreographer experiments with ideas surrounding the act of breathing, artificial respiration, and the ebb and flow of water.