During a recent jaunt uptown I dropped in at the Adam Baumgold Gallery to see The Ganzfeld (unbound). This was a celebration of the publication of The Ganzfeld, a book of pictures and prose that features the comical work of over forty artists, including local favorites like Red Grooms and Fred Tomaselli. 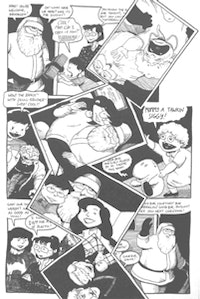 An ambitious endeavor, Exit Biennial: The Reconstruction is the first of five Biennials planned for the decade to highlight Exit Art’s transformation from an offbeat Soho gallery into a major venue for emerging art. The inaugural biennial is spectacle of thirty-four site-specific installations and performances, rivaled only by the new space itself, the curatorial theme of the show. The new 11, 000 square foot space is delineated by chain-link fence creating a camp, X-ray-like feel, immediately setting the exhibit in a political context. Visible beyond the entrance are a café, offices, and the exhibition area. The layout and ten dollar suggested donation raise the ante on the expectations for the exhibition, composed of a group of emerging and relatively unknown artists. 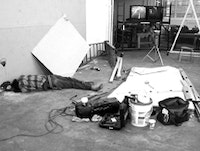 The socio-economic implications of Broadway are enormous, and examining what Broadway “represents” is the first key to making some sense of William Pope.L’s complex, ongoing street performance The Great White Way. 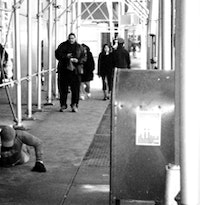 Greg Stone’s works on paper at Pierogi 2000 evoke mirrored and multiplied geometries, and their immediate gestural effects fluctuate with the elusiveness of a flickering fire. Located in the Pierogi gallery adjacent to the retrospective exhibit of the late Mark Lombardi’s preparatory drawings, one realizes that the artists share an interest in the interstices between visible and invisible worlds. The cool and diagrammatic lyricism of Lombardi’s investigations into the dangerous world of capitalist manipulation surprisingly echoes Stone’s hallucinogenic and organic fields filled with networks of synaptic configurations. 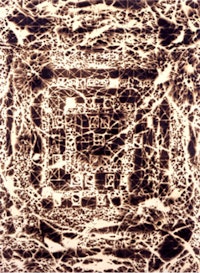 Diagonals whip the length of James Little’s six large canvases at L.I.C.K. LTD Fine Arts. Adjacent lines converge at the paintings’ edges to form a series of multicolored wedges of varying dimensions flip-flopping through each image. Little reinforces this triangular architecture with intense, repetitive brushwork and flawless attention to surface.

Water provides the aqueous conceptual glue binding together the work in this 12 artist group exhibition. Curator Lilly Wei conceived the exhibition "on a playful note, [as] an early Spring show that looks forward to Summer." I am not sure if this curatorial conceit serves the art well, as it establishes a very literal common denominator which perhaps dilutes the potency of the individual pieces, turning them into eclectic examples of "water art." Nevertheless, a few of the artists presented here break this surface tension.

In an attempt to both reinvigorate the landscape genre and complicate our perception of the real, Grounds presents the work of Caroline McCarthy, Ezra Parzybok, and Ravi Rajakumar. Each artist displays landscapes that have been carefully constructed for seemingly different purposes. McCarthy uses an innovative video technique to create a fictional, urban canyon, Parzybok builds exquisite little worlds out of familiar objects, and Rajakumar appropriates specific moments of animated landscapes. The sharp formal differences between the works creates a dialogue about appearance and reality.

Despite its pageantry and craftsmanship, Andy Yoder’s exhibition In a Perfect World is baffling. Yoder presents a giant pair of black wingtip shoes that mostly fill Plus Ultra’s limited space, turning the gallery into a sort of oversized shoebox. The odor in the space and the shiny surface of the shoes reveal that they are made of licorice. 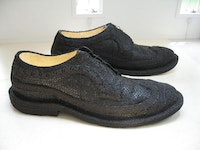 Jonas Mekas and Rosa Valado: A to C Jumpin Over B

I like looking at Bill Jensen’s paintings the same way I like watching little league baseball players. In both cases, all of their emotions are right on the surface. Emotional investment is an increasingly uncommon quality in the world today, but it was visibly evident in Jensen’s latest exhibition of paintings at Mary Boone’s gallery uptown. This show was the latest in a series that has defined the painter’s newfound and forcefully reinvigorated style. I think the shift first emerged in 2000 with an exhibition of works on paper at Danese that was an absolute tour de force—a rare event that many artists are still discussing. This was followed the next year by a spirited show of paintings at Boone’s cavernous Chelsea space. A second stunning run of works on paper returned to Danese last year, and this most recent show with Boone uptown was no less striking. In fact, it was quite theatrical, given the gallery’s dark ambience that was enhanced by slatey skim-coated walls and directional spot lighting. 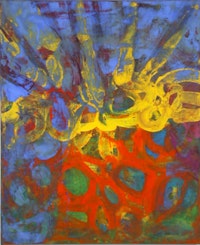 In John Walker’s current exhibit titled Changing Light, the artist turns his compass point in an unexpected direction to explore an American theme, the coast of Maine. Yet again Walker provides us with an experience that invokes a conjunction between nature and our collective past. But gone are the charged iconographical and autobiographical motifs, and in their place are deep vistas filled instead with a hushed emptiness.

A painter whose name has been for the most part identified with landscapes which combine abstraction, representational motifs, and an unusual repertoire of high-key colors, Wolf Kahn has finally revealed to his critics and audience that his distinguished career has had a long and complicated evolution.