Pity and Terror in the Parlors of the Mighty

"I’m really, basically, a homebody," insists Jiang Qing, a.k.a. Mrs. Mao Zedong, in the interview that opens Anne Washburn’s play The Ladies. "I’m a very ordinary girl who became a movie star." The claim is disingenuous, but tantalizing; in a play by Anne Washburn, whose work makes a study of exposing the malevolent within the mundane, a character’s proclamation of ordinariness is a promise of extraordinary things to come.

Beckett in the living room, Beckett up your earhole

Back in October, a bunch of us got together to discuss what we as members of the theater community might do in response to the threat of war on Iraq and to the attack on civil liberties at home, how we might stop feeling isolated, discouraged, and afraid. It occurred to us that the most truthful and direct response was to use what we already do: lots & lots of different kinds of theater. 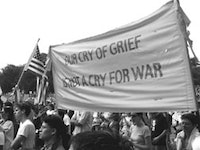 American Theater Nexus at the BRIC Studio Louise will be speaking today at a gathering of corporate executives. It seems that the regularly scheduled speaker, Alice ("Alice The Magnet"), has had her arms pulled out of their sockets this very morning. Louise’s speech will turn from self-help aphorisms to a detailed account of her recent drunken encounters with a fella who had promised her a six-pack in exchange for sex. A bargain, at any rate.