The Yodel that Ate Celluloid:

Yodeling as Secret Weapon Tim Burton’s over-the-top 1996 film Mars Attacks, about menacing Martians conquering a globe of naïve earthlings, features the yodel as the vocal equivalent of a secret PsyOps weapon that ultimately saves the earth from Martian domination. At a climactic instant, the headphones of an eccentric old lady who’s always listening to her favorite yodeler, Slim Whitman, suddenly slip off her head, exposing the Martians to Whitman’s histrionic yodeling-crooning: "When I’m calling you-oo-oo…" Yodeling’s high notes shatter the Martians’ helmets and their heads explode in great bursts of green cerebral goo. 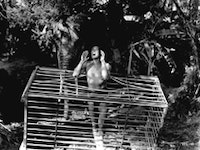 The Long Goodbye Merge Records I never knew exactly who the Essex Green were. I think for a while I had them confused with Ladybug Transistor (with whom they shared members). I knew they lived in a big house in Kensington (Brooklyn) and recorded in the basement—or was that Ladybug Transistor? And this guy I know played with them on occasion—or was it with Ladybug Transistor? Since they were affiliated with the Elephant Six label, I assumed they purveyed a lite, melodic brand of neo-psych-pop not readily distinguishable from Of Montreal, Elf Power, or Apples in Stereo.

Out of Season Sanctuary Records On the evocative album Out Of Season, the first sound one hears is a rising gust of wind. Those familiar with Beth Gibbons’s work with Bristol’s trip-hop pioneers Portishead won’t interpret this as a gentle, summer breeze but rather as an ominous sign of things to come.